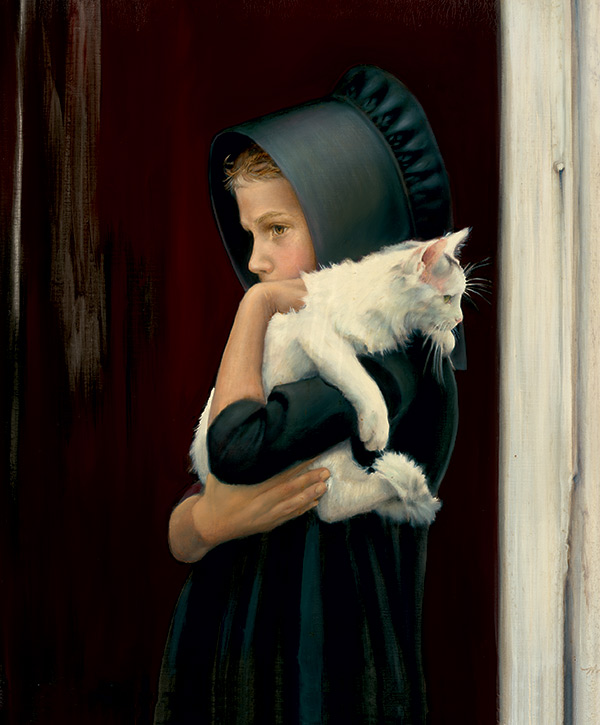 Sarah has never lost it’s charm and intrigue. Over a million prints have been sold over the years. Although we have tried to retire the image, the demand keeps bringing it back.

Sarah is my first Amish painting.

The following letter was the first (but not last) I had received indicating that my paintings were connected to people that have lived before.

With all the uncertainties and unexplained events in this world, I offer you the following.

I am a 42-year-old mother of two, a college graduate, and hopefully as sane as the next person.

Having been born and raised in the state of Georgia, I find myself displaced in New Hampshire, as a result of my husband‘s transfer with his employer.

I left our dream home in Grayson, Georgia. (45 miles NE of Atlanta) Our dream home (is/was) a two-story log home on five acres, one-half mile straight back in the woods.

We constructed our house out of northern white cedar and ponderosa pine. A tin roof, wrap-around porch, and red brick kitchen floor helped to keep our home as authentic as possible. We purchased the land from a family of Amish descent, the Matthews. We traced the title on the property and discovered that the land had remained in the family for centuries. The original grant of land was for 305 acres. The descendants of the Matthews are buried about 1 mile from our acreage.

We understand our house was built on the original homestead facing north, next to a creek. From the time we began building the house, we found items missing or moved mysteriously. This became so common-place that we thought a friend was having fun playing tricks on us.

Upon completion of the house, we furnished it with primitive antiques, some of Amish origin. Shortly thereafter, we noticed the same unexplained removal of items from inside the house. Pictures were moved around on the staircase wall. Some pictures would be found turned backwards on the wall. My daughter, Wendy, Noel, my sister, and friends were amazed (scared) to hear footsteps on the stairs leading to the sleeping loft.

The sound of a ball rolling over the boards on our porch, a baby crying and a cat mewing were all unexplained occurrences that became too commonplace. In desperation, I sought the advice of a local Atlanta medium. She visited our home twice and explained that we had the spirits of a woman, child and baby in our home. She assured us that the spirits were not dangerous, but they wanted their presence known.

My Brumby rocking chair that began rocking by itself was a sign that simply could not be ignored.

Late one Saturday evening in November of 1990, Wendy was visiting and we watched the rocker rocking by itself. The sound of the ball rolling on the porch and the baby crying prompted Wendy and myself to search in and outside of the house to determine the origin.

In desperation we decided to try to communicate with the spirits in an attempt to keep our sanity.

To our amazement, before our eyes, materialized an Amish woman with a baby in her lap sitting in our rocking chair. ”She explained that her husband was out hunting and she, the baby and their daughter, Sarah, were waiting for him to return. We spent some time talking with her before we met Sarah, incidentally, the mother‘s name was also Sarah.

Over the next year we encountered the daughter, Sarah, several times. At one point the lids of antique tins would go flying across our kitchen floor.

We were never afraid of our unusual house-guests and found ourselves talking to them as if they were next to us on Christmas Day. We bought Sarah presents to remain in the great room close to the rocker (stuffed cat, wooden toys, blocks and antique handmade dolls).

To finally get to the point, I have enclosed an advertisement out of Country Home Magazine for your studio. The girl holding the cat in the center of the page is our Sarah. The resemblance to our Sarah is remarkable. What a treat for us.

We are happy in the knowledge that we are not insane, as many people have experienced the house-guests in our Georgia home.

Please send information on this particular print, as it would be a treasure for us to once again have a Sarah in our New England home.

Nancy’s Sarah was a very real girl who has become a very real woman, but it is evident that her previous spirit must have inhabited a space dripping with Spanish mosses and heavy, sweet thick southern scents. On languid afternoons, that Sarah probably craved the simplicity of oatmeal cake and lemonade under the sprawling live oaks of her parents farm. Spread your own quilts and invoke the shadows of your history and know that innate goodness lingers forever.

About the author: Ann Marie

No other information about this author.

What a powerful story. I too love the Amish paintings from Nancy. Over the years I have purchased many prints and I love them. Nancy has a beautiful gift and Ann Marie had the pleasure of meeting Sarah.

The portrait of Sarah hung in the dinning room of our home Windy Ridge for years; she was a quiet and lovely presence in a busy home where eight children went in and out of our home in the Texas Hill Country. When we moved to New York for work she hung in our old farm house built in 1811 and brought her quiet and lovely presence there. While the children were now off to different parts of the United States she was a wonderful memory of our sweet life . My husband and I worked in mission so he especially was off to places around the world and Sarah kept me company. My husband was in Haiti when the earth quake erupted and he was buried in the rubble for 72 hours; although they got him out my lovely husband did not survive. I am back in Texas nearer to some of my children and Sarah is with me reminding me of God’s constant sweet grace that is pure and simple and very lovely. She reminds me to remain open to that grace even through my deep grief. My heart goes out to those who grieve the loss of loved ones and know that art and poetry and the ever presence of God is what helps to bring us to places where healing can start,

I grew up in Ohio where there are many Amish and Sarah was always a reminder of my simple and lovely childhood in the country
so Sarah and I had a lot in common. This work of art is precious to me and she always reminds me that “Tis a gift to be simple” I thank you Nancy for your extraordinary art graces my life.

I received a print of “Sarah” from a relative several years ago. It is signed and an embossed circle next to the signature says it is certified and registered. What does that mean and is there some documentation I should have to verify this print?

Hello, the embossed circle is Nancy Noel’s seal of authenticity. Sadly, people illegally reproduce artwork. This seal ensures that you have an authentic Noel print. Congratulations!

I have been a fan of Nancy’s art for years. We have purchased several prints for our home. Five years ago our daughter, Emiley, passed away. She was profoundly mentally and physically disabled. She had beautiful long sandy blond hair. We were trying to make the decision to change the decor in her bathroom after she passed away. It took awhile for us to make changes. Her bathroom was decorated with vintage dolls. My husband asked me to see if you had any new prints on your website…..there was our Emiley….dropping a doll…your “Letting Go”. Our family believes this was a sign from our loving Emiley. Thank you. Emiley Burt’s family

I have 3 of Noel’s prints. I am always asked about them. Every other Christmas my husband would buy me one. Love them and cherish them dearly.